by Joe franklin
in Music, Uncategorised

A whole two long weeks ago we headed down to Printworks in Canada Water to check out the new & already notorious layout of the club for La La Land, and what a night we ended up having!

Agreed, it’s not exactly the main kind of music that our magazine really follows, but for me it was imperative to visit the club, and Latmun is a guilty pleasure of mine so I decided to back it, and I couldn’t be happier with that decision. First and foremost, unbelievably glad to be back at Printworks so thanks for the shout!

From the offset the sound-system was really being put through its paces. It’s fair to say that the collective brought together by Green Velvet more used to to the expansive sun-bleached warehouses of Ibiza than the repurposed South London papermill that is Printworks, but they seemed just as at home as anywhere. The improvements made since the last time we ventured into Printworks were very noticeable, and in all honesty if anything it was the difference in audio that was the least tangible. 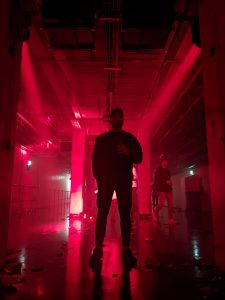 The new and improved visual screens first caught my eye on entering the main room, but it was during Latmun’s set where they really came… to light. About two thirds of the way through his set he mixed in the creepy singing girl from Squid Game, alongside the (Red Light/ Green Light just before the drop), which had the crowd quizzical enough already, but the entire club from the criss-crossed-spotlights to the giant new screens were illuminated in the pink of the soldiers from the show, and it was quite overwhelming and enveloping. Props to Latmun for weaving that in so quickly as well, it was the perfect venue for the reveal, and just before Halloween as well!

In addition the club has been streamlined to enable better access and stop crowd funnel-necks, and the opening of the upstairs makes for a much more inclusive feeling to the venue. The newly-opened Inkwells has to take the biscuit though – it feels like you’re in a warped dimension combining the best parts of both Berlin & Miami (besides the palm trees). A lovely lady stopped to take a mini photoshoot of me looking perplexed at the wormhole I had clearly just walked into (one still-shot of which is above), but I quickly scurried upstairs to catch the main man Green Velvet bring the day to a fantastic end.

Printworks will be closing its doors this Summer & there are currently events in the line-up until the end of May, so make 2022 your year to hit the behemoth before it leaves us all with a big print-factory-shaped-hole.