Since the summer of 2011 Flexout Audio has released 60 singles or EP’s and 5 compilations, thats a lot of music and at a digital age when anyone and everyone seems to run a record label its harder than ever to stand out from a completely oversaturated market. There has been so many labels come and go during the last 5 years and Flexout Audio has remained a consistent source of solid drum and bass. To celebrate not giving up and the continued effort to seperate the wheat from the chaff of up and coming artists. What better way to celebrate then to be given the honour (for the 3rd year in a row) of taking over control at the Dissocia tent within Chinatown of Boomtown City. If your at Boomtown do not miss the special Flexout Audio 5 Year birthday party takeover on Friday night from 1-3am.

Previous years have seen Sense MC, Arkaik, PRTCL and Bassi amongst others rep the underground London based label, who will it be this year? We can exclusively announce that taking controls will be head honcho Bassi, PRTCL and Transparent hosted by In-Reach’s very own Hainsey MC and Joe Raygun. On that very same night (12th August 2016) its also the worldwide release of the album ‘5 Years Of Flexout Audio’ 30 tracks from the last 5 years compiled by Bassi for the bargain price of £5.

But don’t worry if you don’t want to wait till then to have to stream these tracks on spotify or buy them on Beatport. You can head over to the Flexout Audio Bandcamp store and grab them right now. 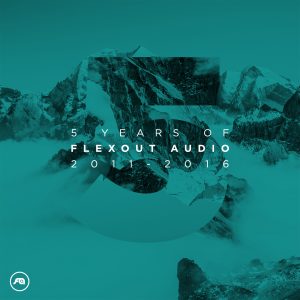 For a quick preview of what tracks made the cut to the final compilation head over to the Flexout Audio soundcloud to hear clips and give yourself a history lesson.