The newly minted producer alias ‘Minor Forms’ is up next on CIA with his weighty ‘Immersion Method EP’. Only a handful of releases into being, it’s possible you haven’t come across the producers work as Minor Forms yet. But also being known as one third of production trio Arcatype, Justin Mann continues to show off with his wealth of influences and experiences here too. We caught up with the man behind it all and delve into the EP, his background, influences and future plans for this latest project! 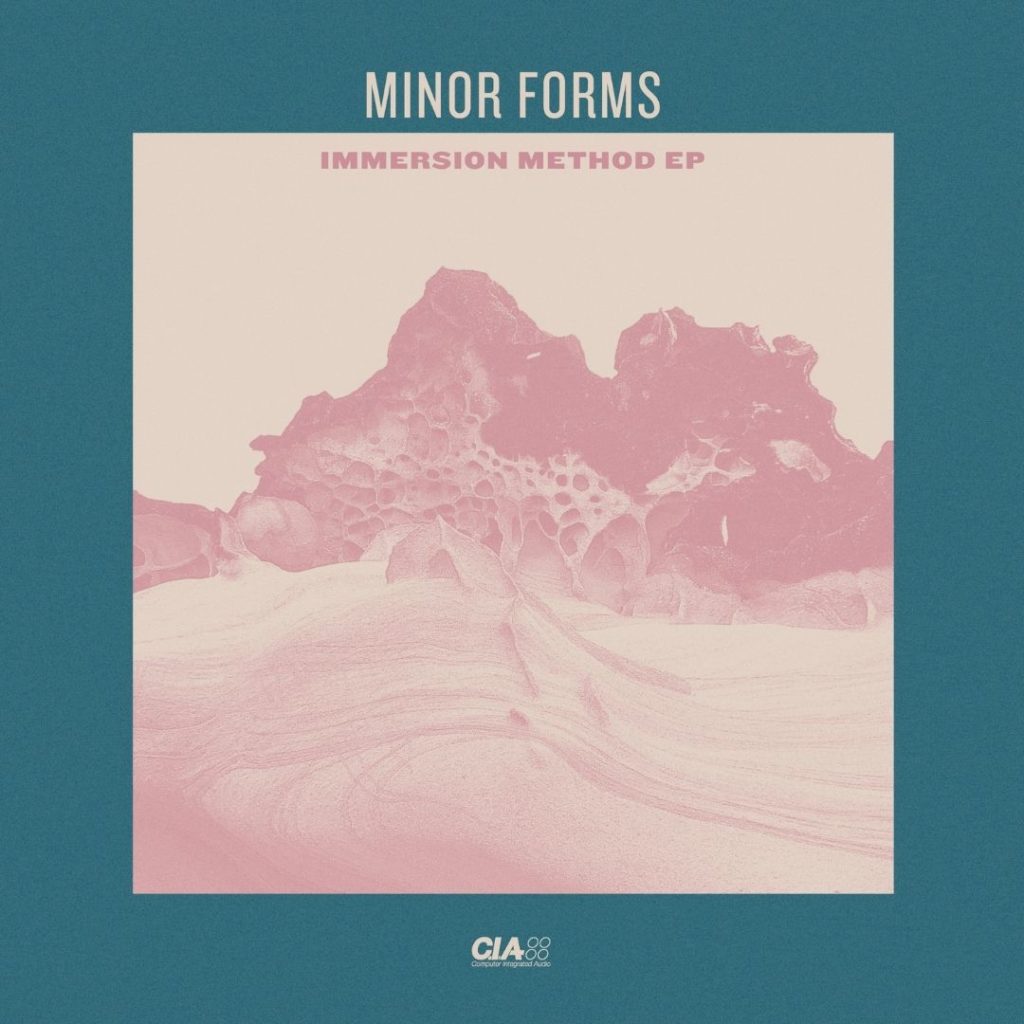 Easy Justin! Thanks for taking some time to speak to us today, how are you doing?

Hi guys. Firstly, thanks for having me! I am doing well, considering everything that is going on with Covid. Keeping myself busy with being a Dad, working and fitting music in-between.

Can you introduce yourself and explain your journey in Drum and Bass so far? What got you started into this scene & production?

So I’m 27, born and grew up in London, and spent 5 years in Manchester for university. Both cities have played a huge part in my DnB journey. From going record shopping at BM Soho as a teenager, my older brother Karl teaching me how to mix on vinyl, to my first raves being at clubs such as Cable and Fabric, to moving to Manchester and discovering the amazing scene there.

At university I started playing out in clubs and forming the basis of my network. The pinnacle of these times was definitely Soul:ution. Me and a group of mates used to go as much as possible, and I was even lucky enough to warm up once for Marcus Intalex. The last Soul:ution was in Manchester the same night Marcus passed away, and I remember he played a 2-3 hour set, and dug really deep. I will never forget when I found out he had passed, so surreal and incredibly sad. He was so integral in electronic music and his shoes will never be filled. These nights at Soul:ution amongst others, taught me that good DnB is all about variety, mood and of course a touch of soul.

All these experiences feed into my production. I started to produce at school (age 16-17) with my good friend and long time collaborator Tommy (aka Composite, and ⅓ of Arcatype), but it wasn’t until university that I started to take things more seriously.

Some will know you from your escapades as part of Arcatype, however your latest project as Minor Forms will be new to many. Tell us about this new project? What made you want to start this up?

Yes, very new indeed, even to me! Minor Forms started at the beginning of 2020, really as a means to test myself creatively. I have been writing solo since I started to produce, but never in a serious way. What started initially as a small project soon began taking up a lot of my time. I started finishing tracks and then sending them out to labels, and this has slowly accumulated into a lot of exciting plans. I am really happy with how things have developed so far and I’m feeling really optimistic about the future of this project.

We are hugely looking forward to the release of ‘Immersion Method’ on CIA. How long have you been working on these tracks? Have you been sitting on them for a while?

I’m absolutely buzzing to get these tunes out there. Each track has taken a while to finish. Also in the months writing the EP I have developed a lot as a producer, and so throughout that time I have tweaked parts of the tracks along the way. Start to finish it’s been about 8-9 months maybe, so not a huge amount of time. I don’t like to rush things and I think it’s good to sit on ideas and develop them at a steady pace. I wouldn’t want to rush a tune, release it and then look back and regret that decision.

You are clearly a versatile producer who spans a range styles as shown in this latest release. Is it a conscious decision to bring all these styles together? Was there a ‘vision’ for this EP?

Honestly, I didn’t have a vision for the EP, and it formed quite organically. I usually sit down in the studio and write whatever I feel like that day. I like variety and I get bored very easily so a mix of styles is essential really. I try to string my music together with a general feeling of moodiness. There are some sounds and techniques I carry over from tune to tune, and I have a small, badly organised set of my own samples, but in every tune I try to bring something new. It also helps that Smithy (Spinback) is a legend and is very open to listening to my demos.

‘The Hunt’ has got that iconic early noughties tech step sound, as well as ‘Big Style’ coming in with that original jungle flavour. Were there any specific inspirations for this release?

‘The Hunt’ is definitely a nod to the Virus/Prototype sound of the late nineties and early noughties. In terms of club music that style is and always will be my favourite. Albums like Wormhole, Sleepwalk, Inside the Machine, Armageddon are unreal and to me that sound hasn’t been bettered creatively since, but it’s fun to try haha.

‘Big Style’ is my take on jungle. Big breaks, lots of 808 bass and a big pad, which is sometimes all you need. It’s funny that track because my daughter, who was about 6 months old at the time just pressed two notes on a synth while a break was running and it sparked the idea for the tune. I think she is destined to be a DnB head haha.

How have you been coping with the lockdown as a producer? Have you managed to get much time in the studio?

At the beginning of lockdown in March 2020, I was in-between jobs, and suddenly found myself with more spare time, which really allowed me to get creative in the studio. Very fortunately I was able to have a few months off working during this time, which was a huge blessing when I think back to it. Luckily the inspiration to produce was there and I almost used it as a constant reminder that I might be able hear the tracks on a club soundsystem one day.

I have definitely felt conflicted at times, sometimes making club music when there are no clubs open feels a bit pointless, but the listeners are out there, and for now DJing has moved to livestreams/podcasts/online mixes etc… So I think the hunger for good club music is still prominent, and also I feel there is a real need to keep momentum going for when the clubs do finally re-open! On the flip, I have also been writing tracks that might be better suited for listening. Again, this comes back to the idea of variety in styles.

Let’s talk about the CIA connection, how did this come about? It must be a dream for an upcoming producer like yourself to release on such a well established and renowned label!

It is absolutely a dream! I am lucky in the sense that I am starting this project with contacts already established, through releasing tunes as Arcatype. So that’s where the link came about. I have been chatting to Smithy (Spinback) since the first Arcatype release came out on CIA. He is great, and really helped us (Arcatype) and me in my solo productions to push the music to be better. He is great at giving feedback and picking out parts of demos that have potential, and really the 4 tracks on this EP would not be the same without those back and forth conversations.

What has been the highlight so far over your musical career? Any bucket list moments?

A highlight to this day is when we signed the first Arcaytpe release on Ingredients Records back in 2015. That was such a high, as up until that point the idea of getting tunes together and releasing them on a label that backed the music was alien to me. Another highlight was playing at LeBikini in Toulouse for Julien’s (aka SKS) night. It was an awesome night and also my first international gig! Can’t wait to get back there. I have a long long list of things that I want to tick off in my solo career and with Arcatype, so hopefully I can continue to release music for a long time.

What’s next for Minor Forms in 2021? Anything else we should keep an eye/ear out for?

Lots and lots of music coming out this year. After the CIA EP there is a string of releases on some great labels. I have some really exciting things in the pipeline for this year and into next year and can’t wait to get the tracks out there. I am also making a real effort to collaborate with friends and start to build up a network of producers which will enable me to bounce ideas back and forth. Working solo is great, but it’s important for me not to lose sight of collaboration, which essentially is the key to driving the music forward.

Big ups for taking some time out to talk to us, we are really looking forward to this EP hitting the shelves!

Thanks again for having me! I’m really looking forward to the release and as always a huge shout to Smithy and Quiff for releasing these tracks on the label!

The Immersion Method EP is out today on all digital platforms, we recommend heading over to CIA’s bandcamp to cop this wicked release!