As we trundle on unwillingly toward the winter solstice, one could be forgiven for dreaming of the sunny beaches and warm evenings that come hand in hand with festival season. Perched on the island of Pag off of southern Croatia, Hideout Festival is one such daydream coming closer and closer.

The line-up has now become quite the eclectic mix with some big DnB names heading East for Hideout’s 8th instalment including the mastermind Andy C and Chase & Status, a strong grime rep from the likes of AJ Tracey, Mistajam and my boo Nadia Rose, and a heavy house base including MK, Kerri Chandler and Eats Everything. A few stand-outs for me; the bringer of the party Artwork, the true downshutter of Boomtown Holy Goof, and the boys who headlined the best Printworks night we’ve attended yet, Gorgon City. 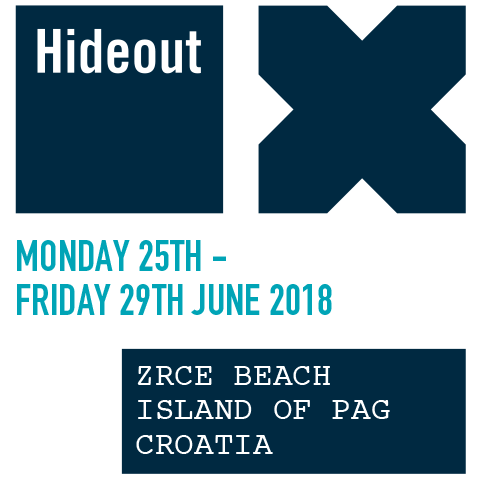 Part of the beauty of Hideout isn’t the 150 artists that attend over the week, but the fact that it’s nestled in-between mountain ranges on one side and the Adriatic sea on the other, which sits at a cool 23 degrees during June. On top of that there’s obviously all the classics that you expect at festivals overseas, like the boat parties and the beach parties. Plus it’s only 20k strong, and with the likes of Gottwood, Houghton and Farr making waves over here, the smaller/medium size festivals are becoming the popular way to go.

We haven’t been to this but we’ve had good feedback from our friends at other mags, and from some of the readers, so we’re keen to give it a spin this year. Look out for the In-Reach tees!

Even though earlybirds are sold out, Tier 1 tickets still stand at very tempting £149, but I wouldn’t sleep on it for too long, Hideout’s sold out for the past seven years and this line-up looks to be one of the largest yet.