The famous Vietnamese festival stages its inaugural edition in Albania in just one week!

by Joe franklin
in Articles

There is only one week left until Epizode opens up on Rana e Hedhun beache in Shëngjin, Albania, promising four days of round-the-clock beach music from September 23rd to the 26th. As recently as yesterday they team there added tech legend Solomun to the line-up, for an all-night set on the closing evening.

If, like us, you were somewhat disappointed by the Great British mega-summer that consisted of a generous four days, this could be your last chance to soak up some rays & get down from sunrise to sundown for about the same cost as a UK festival. Previously held on Vietnam’s Phu Quoc island, the Albanian location is just as idyllic but with a more accessible three hour flight instead of ten.

Epizode’s beachside Lezhë edition was organised with support from another Albanian festival ‘UNUM’, though the Epizode team have instrumental in pulling it all together. “We are very excited to launch Epizode and bring all its vibes to beautiful Albania,” state the Epizode team. “We will continue to write the story we started five years ago in Vietnam, together with people from 90 countries. We will always be driven by pure quality and the best atmosphere, and fully committed to bringing the biggest DJ heavyweights while showcasing the greatest Balkan’s talents. We would like to invite all party heads, thrill-seekers and travelers, to join us on this new adventure.” 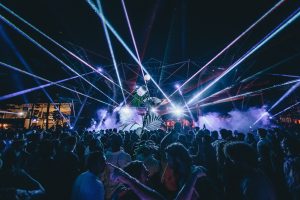 As for the line-up, we’re looking forward to see some big names in underground tech including Marco Carola, Michael BiBi, our very own Richy Ahmed, Dubfire, Binh, Adriatique, Petre Inspirescu, Hector, Guti, and Nastia. Set across two beautiful beach stages, us lucky ravers have the eclectic choice day-to-day between well, raving, tanning or both. Five years in the making, Epizode is a festival that has been on our radar for some time, though always been a bit too far afield to make it, so we’re looking forward to getting out and about in Europe and lapping it up.

If something about Epizode has tickled your fancy, tickets are available on their site for just over a ton, so save yourself another shitty night out in Bridge & get to the beach. You can also check out their Facebook page and speak to an organizer here.